My husband and I took a nonstop flight from Chicago and arrived in Rome the day after there was a fire at the Rome Fiumicino airport.  Because of the fire, we spent quite a bit of time on the tarmac before a bus transported us to the terminal, where we waited in a massive, chaotic line to get through passport control.  We noticed airport workers wearing dust masks and although we didn't smell smoke, I imagine if you were there for the entire day, you'd want to protect yourself from the smell or particles that might still be in the air.

I've mentioned before my abhorrence of the ubiquitous "selfie sticks" in use by every tourist in Rome and, because of that, I never got my camera out of its case in Rome and took only a half dozen photos with my phone's camera.  We visited the Vatican on arrival day and along with St Peter's Basilica, my other favorite was the ceiling of the Map Room, or Gallery of Maps, in the Vatican Museum. 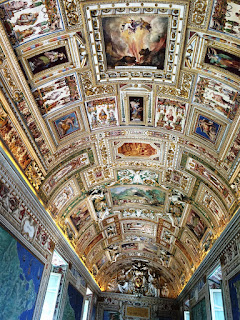 Ceiling of the Map Room at the Vatican Museum

We saw many classic sights in Rome and had the added bonus of getting restaurant, gelato, and sightseeing suggestions from a young friend who recently spent a semester studying in Rome.  It's nice to get some "insider" tips!  Those tips resulted in a wonderful lunch that included pear pasta at Osteria Del'Anima near Piazza Navona.  We also enjoyed fabulous gelato at Frigidarium (near Piazza Navona) and Verde Pistaccio (near Termini train station).  My husband's favorite gelato flavor was lemon and mine was hazelnut!  On our friend's recommendation, I had the cacio e pepe (cheese and black pepper) pasta more than once.  I think I need to look for a recipe for that; it's a winner!

The quiet of Cinque Terre followed the hectic sightseeing schedule that we set for ourselves in Rome (see blog post here:  http://marygtheknitter.blogspot.com/2015/06/ups-and-downs-in-cinque-terre.html) but after that, we went to Firenze (Florence) for another sightseeing frenzy.  To make the most of our time, we decided to splurge on the Firenze Card which was helpful in saving time at many museums, although I'm not sure we saved time at the Accademia (where Michelangelo's David is located), which had a long line for reserved tickets as well as unreserved tickets and each line moved rather erratically (at the whim of the museum staff), but eventually we were admitted. 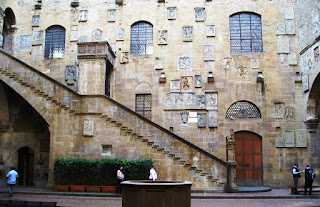 On our first day in Florence, we were looking for lunch and specifically went to All'Antico Vinaio, a little deli-like place that was highly rated on TripAdvisor.  However, it had hordes of customers lined up out the door and down the street and we decided we didn't want to wait so we walked on.  After viewing the Museo del Bargello and still not having had lunch, we returned to the street where the deli was located and it was now between normal meal times so the line was gone and we walked right in and ordered a roast pork sandwich (panino) with toppings of zucchini, eggplant spread, cheese, and red pepper spread.  There were so many toppings to choose from!  The restaurant also offered self-service wine for 2 euros per glass and had indoor seating at large tables where we were able to relax, rest our feet, and share our sandwich.  It was SO good that we made our way back there the next day to get another fantastic sandwich for lunch.

We found a tiny little pizza place, I'Pizzacchiere, just below Piazzale Michelangelo, where you definitely need a reservation (you can make reservations online), and enjoyed a White Tiger pizza and mixed salad.  Delizioso! 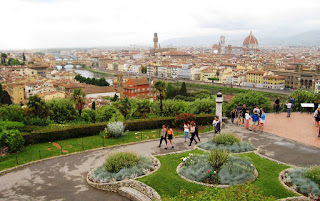 View from just above Piazzale Michelangelo

Although we missed the Gregorian chanting at the church of San Miniato al Monte, just a short walk further up from Piazzale Michelango, we toured the church at dusk and looked down over the city on a gray, drizzly day.

After Florence, we rented a car for just two days to get into the Chianti and Tuscan countryside.  We drove through the curvy, hilly roads of Chianti and then made a stop in Siena to see Il Campo, the Duomo, and a little bit of the rest of the town.  Our destination for the night was San Gimignano, a scenic tower town located on a hilltop which is listed as a UNESCO World Heritage Site.  We found a little restaurant, DULCISinFUNDO, with a beautiful view over the surrounding countryside and when they opened, we were able to get one of two outdoor tables that were put out just under the umbrella you see in the picture below.  We had the spaghetti with boar sauce, laurel, and juniper which was a regional specialty, the roasted vegetables prepared like ratatouille, and a wonderful tiramisu to end our dinner. 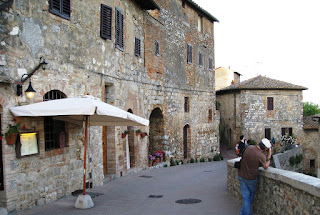 Side street in San Gimignano

The next day, we stopped in Volterra, another Etruscan town built on a hilltop.  You can see that we had the option of the stairs on the right or the stairs on the left to get from our car to the center of Volterra. 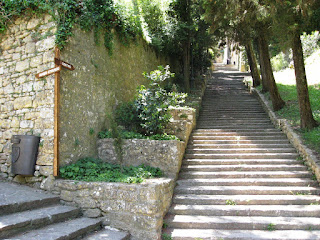 Our trip ended in Pisa so we had an opportunity to get a glimpse of its claim to fame. 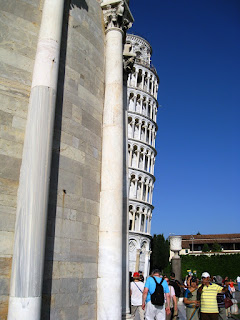 Imagine the number of selfie sticks we saw there!
Posted by Mary G at 6:34 AM