On the Russian Front

From Viljandi, we drove east towards Lake Peipsi, a very large lake on the border between Estonia and Russia. We stopped in Kolkja, located on "the Onion Road" and happened upon the Old Believers' Museum. We were the only visitors on a Sunday morning and our young guide provided a wonderful tour in English. Their website (Old Believers Museum website) states that you should call well in advance to arrange an English tour. We were just lucky! 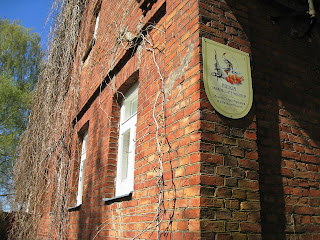 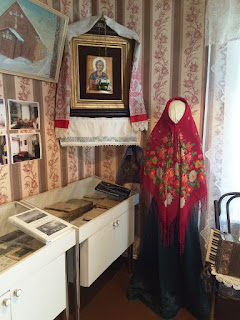 We learned that the Old Believers are Russians whose ancestors left their country when the Russian Orthodox Church started practicing new ways about 300 years ago. The Old Believers wanted to keep practicing their religion as they always had, in the old way. As far as the onions, they are a traditional crop for these people and we saw people out tending their fields. Fish and onions are a staple of their diet but they also sell the onions in larger nearby towns.

I had gotten recommendations from Signe, an Estonian friend, for places to visit as we traveled through Eastern Estonia. We made many stops along the way as we traveled north, visiting an old cemetery in Kallaste for a beautiful view out over Lake Peipsi, a handicraft shop in Avinurme that featured lovely and functional wooden items, and an Orthodox convent in Kuremäe. The convent and grounds were enchanting and Kuremäe was definitely a highlight. 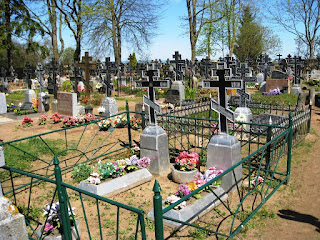 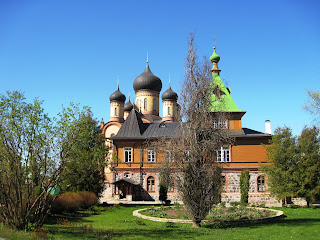 Just a river separates Russia from the northern Estonian city of Narva, our final overnight stop before arriving in Tallinn. We saw cars and trucks waiting in line to be checked at the border and cross over the bridge into Russia. Signe had told me that "even for us Estonians, it's like a different world. Exotic!" She was right. There were menus in Estonian and Russian, many other signs in Russian, and many voices speaking Russian. But we were still in Estonia! 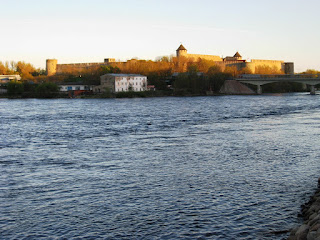 Here's looking at you, Russia