To Breathe As One at the Estonian Song Festival

As I prepare for my trip to Estonia, I was pleasantly surprised to read an Estonian World blog post today about a new film To Breathe As One by James Tusty and Maureen Castle Tusty, the makers of the 2007 documentary The Singing Revolution: 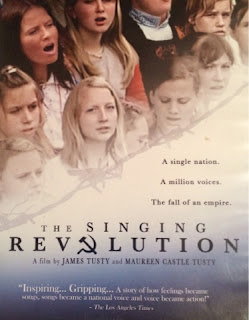 It turns out To Breathe As One was showing on my PBS channel tonight!  It will also be repeated on Saturday, June 28.  If you get a chance to see either one of these films, do so.  They are both excellent.

As an added knitting bonus in the film, I was pleased to see the featured Estonian TV Girls' Choir members wearing beautiful Haapsalu shawls as part of their costumes.