As I look forward to another travel adventure in 2019, I look back on 2018 when, once again, I had an opportunity to visit Estonia and Latvia. The main event that took me there was a Knitting Retreat in the Kurzeme region of Latvia. Senā Klēts, the National Costume Center in Riga, organized the retreat and 23 knitters from nine countries participated. 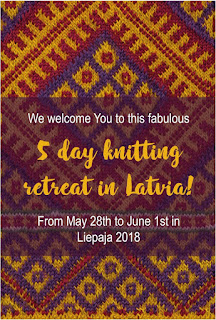 The 5-day retreat took place at the end of May, which was a beautiful time of year to be in the coastal town of Liepaja. We had knitting workshops each day. 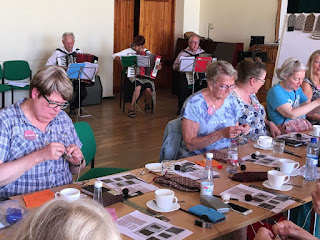 There were cultural activities including music, dancing, some translated theater, and opportunities to learn more about the region's national costumes and customs. 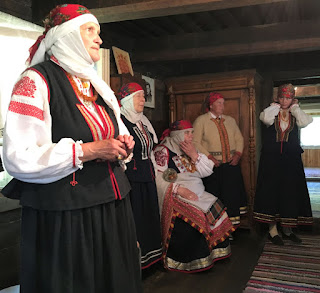 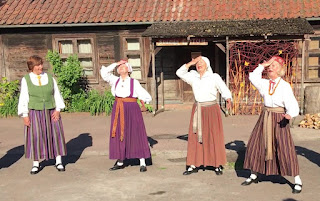 We experienced our meals in a variety of venues including restaurants, family-style at rustic tables, buffet-style, and outdoors in a courtyard. So many wonderful meals with food traditional to the region including black bread and white butter in Rucava and my favorite "sklandrausis" (carrot/potato rye tarts) in both Liepaja and Kuldiga. 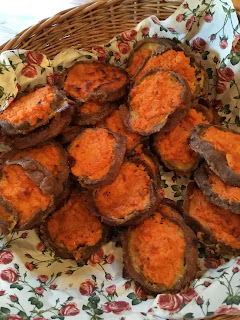 After each day's activities, we enjoyed watching sunsets over the Baltic Sea. Our hotel was a short walk from the beach. Of course, at that time of year, the sun doesn't set until after 10:00 pm, so we had some long, active days, which is my favorite way to spend a vacation. One evening along the beach there was a group releasing "sky lanterns" and we watched the colorful mini hot air balloons rise up into the sky. So enchanting and beautiful! 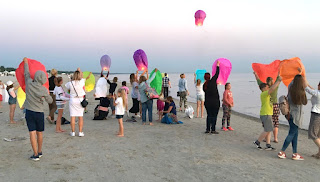 We had many wonderful teachers who are master knitters. Some of our classes were taught in Latvian, but we had an able translator, Ilze, who translated everything into English. English was our common language, whether you were from Latvia, Estonia, Sweden, the Netherlands, Germany, France, Luxembourg, Tasmania, Japan, or the United States. 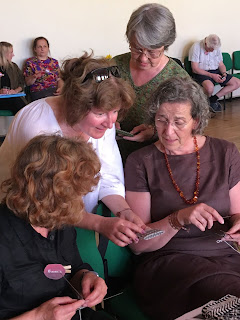 Solvita Zarupska is a creative designer known for her bead knitting, and roses are her signature motif. She taught her class in English and with a good sense of humor! In class, we sampled a small beaded rose design and learned beautiful edging techniques that can be used for beaded wristwarmers, known as mauči in Latvian. I will have a chance to visit Solvita in Ventspils during my trip this year and she has promised to show me her city on the Baltic Sea. 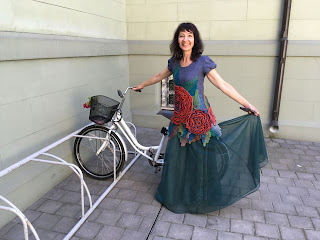 Solvita, "a rose by any other name"

In upcoming posts, I will share more about my 2018 trip as well as what I'm looking forward to this year!