When I was ready to leave Tallinn, I chose to rent a car for a few days so I could make stops and visits that would be hard to do via public transportation. Although I did not request GPS Navigation in my rental car, there it was. The good news? I didn't pay extra for it AND it spoke English!

Inside the Aade Lõng building, I met Reet who works there and speaks English. After showing me the shop, she was very sweet and also gave me a tour of the factory. They were in the process of spinning their slow-grading rainbow-colored yarn on one set of equipment and on a second set of equipment, they were spinning their white-to-gray-to-black yarn. 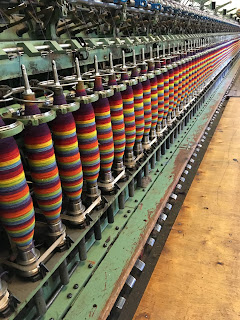 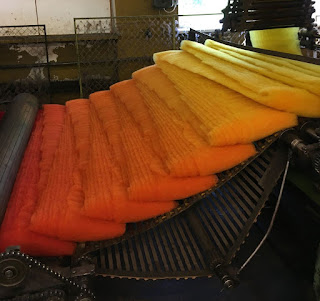 Rainbows in the making

After Raasiku, I made a short stop in Paide. Paide's claim to fame is that world-renowned composer Arvo Pärt was born there. I have read on estonianworld.com that he is the "world's most performed living composer." Besides seeing a museum in the restored 6-story castle tower, I visited a music park honoring Arvo Pärt and noticed a musical mural in the neighborhood. 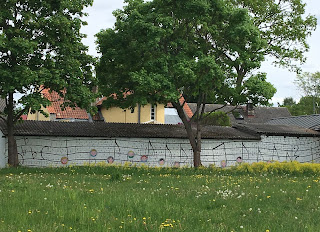 From there I drove to Türi to visit Saara Publishing. My GPS had a little trouble finding Saara, but I stopped in a shop when I saw a sign for käsitöö (that magic word meaning handicraft). Although the clerk spoke no English, when I said Saara, she drew a map and I found my way to a cute building in a nice residential neighborhood. Saara Publishing is the source of many wonderful Estonian knitting books. Besides books, they also carry yarn and needles. 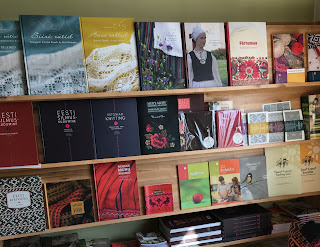 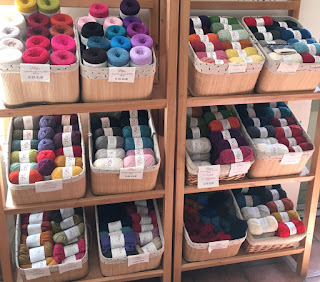 This was still the first day with my car, but I found time for one more stop on my way to Viljandi. I pulled into Olustvere manor house and grounds where I had attended the Estonian Craft Camp in 2014. It was nice to have a walk around and remember the fabulous time I had there. Find my prior blog post about craft camp here. Estonian Craft Camp will be held in Viljandi this year from July 8-14. You can find information at www.kultuur.ut.ee/en/craft-camp. 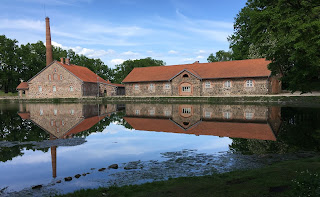 During my stay in Viljandi, I took a short drive to Heimtali Museum located just 10 km (6 miles) away. On my first visit to Estonia in 2005, I had participated in the Nordic Knitting Symposium, which was held at Heimtali. I was also at Heimtali in 2013 when I attended a conference on Traditional Knitted Sweaters Around the Baltic Sea and went to a craft market (my blog post here). It's a lovely place in the countryside, has many historic textiles on display, and I love the welcoming hand-painted mitten fence! 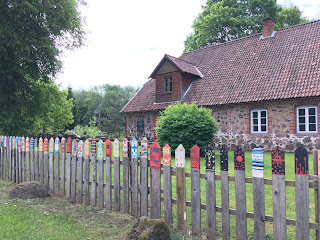 I arrived shortly after opening and met Marla, who has worked at Heimtali for 20 years. She pulled out a variety of tapestries to show me and I had a chance to view the glove, mitten, and sock exhibit that was on display for the 2018 Nordic Knitting Symposium taking place the following month. 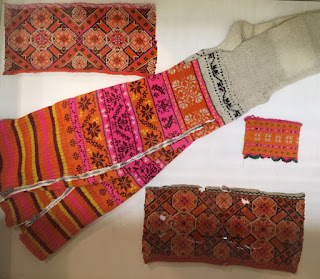 Marla then invited me to join her for coffee and we walked across to one of the other buildings on the property. The baker had been busy making pumpkin buns for a group that was coming to the museum in the afternoon. We had a butter and egg spread with the buns and also some rhubarb cake. That was quite a bit of food for "coffee" and I didn't need lunch after that! 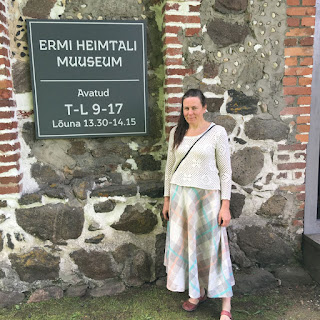