I spent another day wandering Estonia's countryside with my little car, and its GPS allowed me to visit two friends in the rural area of Southeastern Estonia.

I contacted Lüüli before my trip hoping that I might be able to meet with her. Lüüli suggested that I meet her at Maarja küla, near Põlva, where she teaches handicrafts part-time. Maarja küla is a small village-like living and working community for young people with learning disabilities. The village motto is "bridge between people." I received a tour of the handicraft classrooms, took a walk around the property with its gardens and nearby river, and had coffee with Lüüli and her co-workers. The young children were very curious about me and it was fun to see what they were producing! 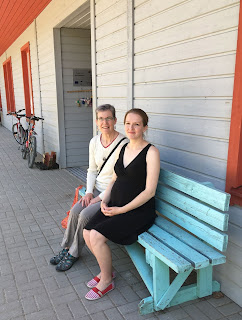 Lüüli and me "and baby makes three"

My next visit of the day was to Külli Jacobson's home. I met Külli first in 2013 when I was on her Walk & Knit relay team. Since then, I have seen her at Tallinn's Medieval Fair where she had a booth selling her mittens (as the owner of her company, Nordic Mittens/Kagu Kudujad). I also saw her in Seto during my Estonian Craft Camp one-day field trip and then in Latvia, when we both participated in a knitting retreat and were roommates. This time, I contacted her and asked if I could visit her at her home. She was very welcoming and provided me with GPS coordinates to find her driveway. After I "chatted" with her neighbors, I found her actual driveway and arrived just as the septic truck was finishing its work.

We walked around and viewed Külli's property and gardens. She picked just three stalks of rhubarb (they were enormous) and she proceeded to make us a nice-sized rhubarb cake. The speed and accuracy of her kitchen chopping skills is like her knitting - unbelievable! 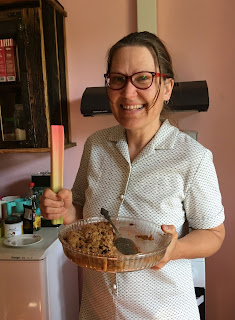 We chatted about knitting, an upcoming art exhibit that she was participating in (Timelessness Exhibit at the Estonian National Museum, which she wrote about on her blog), and her idea to run some handicraft tours in the nearby Seto region of Estonia. I had been to Seto once and found it to be fascinating. I could see the allure of going back to this quiet area to discover more about their handicrafts. To have this handicraft tour organized and led by Külli, who is so involved with the Seto people, seemed ideal. We agreed that we would discuss it further.

Would you like to know how that discussion concluded? Come back to find the answer to this cliffhanger in my next blog post!