Buzzing Around Viljandi and Tartu

In addition to my time spent in the Estonian countryside, I also visited Viljandi and Tartu, each for a couple of days.

I had a chance to see the new Estonian National Museum (ERM), which opened in the fall of 2016 in Tartu. The new museum was definitely on my list to see in 2018. I was excited to see that there was a special exhibit of Anu Raud's tapestries titled Landscapes of My Fatherland. I had seen some of her work before in books and in person. Here is one of my favorite Anu Raud tapestries, a recent one titled "Bird song." I love the image of the women in the Kihnu striped woolen skirts in the wintry forest scene. 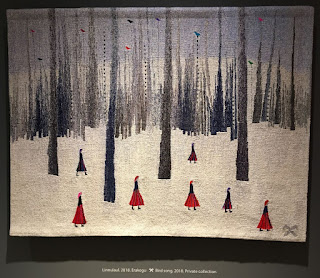 There is a permanent exhibit on Echo of the Urals. It is about the Finno-Ugric people, their language, culture, and genetic background. I really liked the way this exhibit was set up and how you traveled through the exhibit. I also appreciated learning more about the language. I read that "before the 20th century, Estonians used more than a hundred sub-dialects in their everyday communication, which were traditionally distinguished according to parish borders. . . Local characteristics have best survived on the western islands and in the South, in Võrumaa." The Estonians in Võrumaa speak Võro-Seto. I will be on a handicraft tour of Setoland (in Võrumaa) in May this year. I don't speak more than a few words of Estonian and I certainly don't speak Võro-Seto. I'm glad we'll have a guide!

As part of the permanent exhibit, there are many textiles on display including national folk costumes and decorative rugs/blankets. 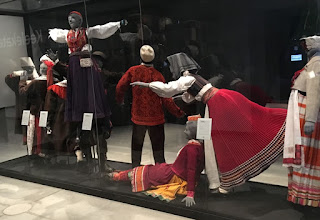 There was also a temporary exhibit, Regarded as a Norm - Perennially Worn, on national folk costumes presented by season: Spring, Summer, Autumn, and Winter. I enjoyed being able to see some special mittens shown with full outfits for particular parishes. I noticed that the museum incorporates sounds along with their physical exhibits. There were the sounds of bees buzzing and birds singing in the Summer exhibit and crunchy leaves in the Autumn exhibit. I thought it was clever to engage more of the viewer's senses while walking through the museum. 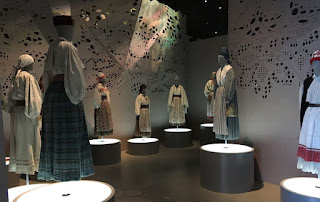 While in Viljandi, I met with Ave Matsin at the Viljandi Culture Academy of the University of Tartu. She told me that the Culture Academy had moved to a different location and when I see the building, "there is a carrot-like pillar: I will meet you there." She was right! 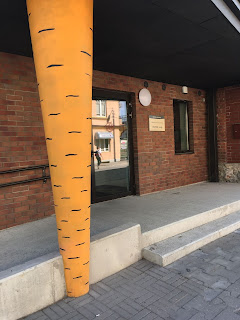 Ave showed me around the new facilities including a tour of the very high-tech, state-of-the-art Italian wool processing and spinning mill equipment they acquired. The equipment spins semi-worsted and they are experimenting with spinning a variety of yarns. This equipment is quite different from the antique equipment that I saw earlier in the week at the Aade Lõng factory. I also saw the weaving studio with 14+ looms, and the woodworking shop with very old-style hand tools as well as many very-modern electric tools. 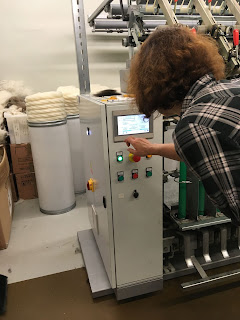 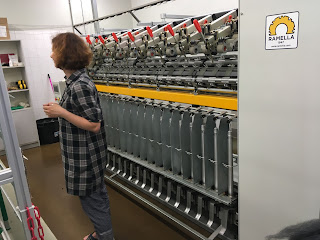 While in Tartu, I met with another friend, Rauno. I first met Rauno, a young Estonian man, when he worked at Tourist Info in Viljandi in 2013 (blog post here). I have visited him each time I've been back to Viljandi (and now Tartu) since then. He has always been very kind and invited me to dinner with family members and made time to show me around. This time I met his girlfriend, Dagne, when they invited me for dinner and made delicious chicken cordon bleu, potatoes, and caprese salad. I also met some of the kittens and cats that they foster. 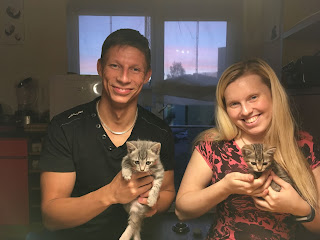