After spending time in Estonia, I headed for Riga, Latvia, where I was able to meet up with Mara (a Ravelry friend) again. I wrote about my first meeting with Mara in 2014 here. This time, my friend and fellow knitting teacher, Sandy, joined us and met Mara and her family. Now that Mara has twin toddlers, she chose a family-friendly location for our outing. We went to Tērvete Nature Park where the children could play and explore and we could walk and enjoy being outdoors. We made full use of their van with three-row-seating to get us all to the park, located 80 km (50 miles) southwest of Riga. 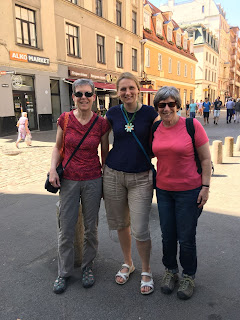 A knitter trio in Riga
Me, Mara, and Sandy 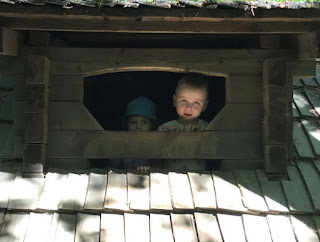 The National Library of Latvia in Riga, known as the Castle of Light, opened its new building in 2014. Although I've seen the library from the outside before, I really wanted to get a look at the inside this time. On a Sunday, I visited the library, which is located on the other side of the Daugava River from the Old Town. I was fortunate to find out that, although the top of the library is only open to the public one day of the week, I happened to be there on the right day! I took the elevator up to the 11th floor and then found the stairs to the 12th floor and great views of the city. 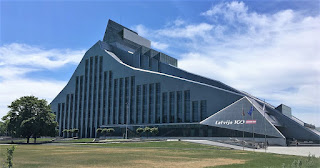 The Castle of Light

A view from the top

In addition to the top floor, I saw the People's Bookshelf which is a 5-story tall bookshelf filled with books that have been donated. 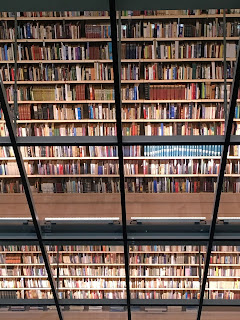 There were a number of special exhibits at the library. My favorite exhibit included a 7-minute video (which I found on YouTube) about the new library and the transfer of books that took place from various library locations around the city. The symbolic gesture, "Path of Light - Chain of Book Lovers," took place in winter when a human chain was formed to transfer books by hand from person to person to the new library. If you're a book lover and library fan, it's an interesting video. There is also a shorter 2 1/2 minute AP Archive video on the same topic (also on YouTube).

Another special exhibit at the library was in honor of Latvia's 100th anniversary being celebrated in 2018. The exhibit showed 100 clay dolls in national folk costumes. Along with the dolls, there was a short 3-minute video that I watched on the making of the clay dolls. In the midst of the video, there was Linda Rubena on the screen. Linda Rubena is a traditional folk art expert at the Latvian National Cultural Center. I wrote about an earlier meeting with Linda here.

As it turned out, Sandy and I were meeting up with Linda Rubena later that day for a tour of the National History Museum of Latvia. We also attended a choral concert competition at the University of Latvia and then had dinner together. 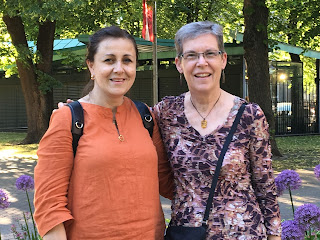 I'll have another opportunity to return to Riga at the end of May this year, just in time for the annual craft market or "gadatirgus."