I have found that many Estonians recommend visiting islands. On other visits, I have been to the islands of Kihnu, Muhu, and Saaremaa. This time I had a chance to visit Vormsi Island with my Estonian knitting friend, Signe. We discussed what we might do on our Saturday together and when I mentioned the magic word "island" Signe immediately thought of Vormsi Island which she had visited twice before. Vormsi is the fourth largest island of Estonia and was inhabited by coastal Swedes or Estonian Swedes up until WWII when they fled. Since Swedish had been the language on the island, you can still find signs in both Swedish and Estonian.

We began our day early with a drive from Tallinn to Rohukula, a town on the western coast of Estonia, quite near Haapsalu. We had a 10:15 ferry to catch. The weather was cool and windy with a few spots of rain but otherwise a bit of sun, too. In late May, the tourist season had not yet started. Restaurants were not yet open and access to other sights was limited. We took a car across on the ferry since we had just one day to explore the island and almost immediately we found the Vormsi Handicraft Society located in the Craft Center. It is located in Hullo and we were lucky to find the building open, so we stopped in. 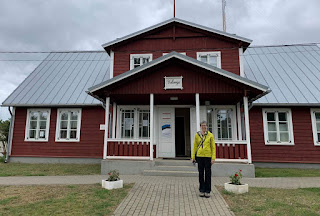 They had some beautifully knit gloves and I chose one fine pair with traveling stitches and a red cast-on edge to bring home with me. Prices were very reasonable. 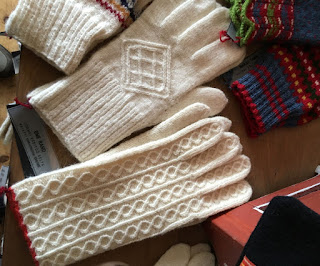 We took a walk to see the 14th century St Olav's Church, a sundial from 1741, and an old cemetery with Celtic crosses (suncrosses). There may have been a few mosquitoes that joined us as we walked through the cemetery grounds. 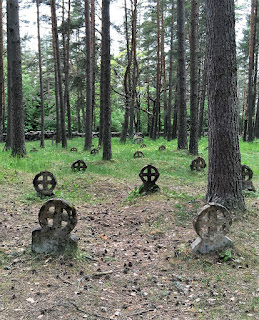 We visited Pears Farm which has been restored by the Vormsi Local Heritage Society. There we found a small museum where we saw traditional clothing, dolls, books, and household items. There was a display of handmade items including some colorful handknit gloves that intrigued me. It turned out that the woman working at the museum, Marju Tamm, was the knitter of the gloves. I got her gloves and her life story, too. She was born on the island. But her story is not as one might imagine. She told us that her parents had lived in Tallinn and worked at the botanical garden. They had a summer house on Vormsi. Marju arrived one summer, a month and a half early! Surprise! She is truly a native of Vormsi. Anyway, although she grew up in Tallinn, she also summered on Vormsi. She moved back to her "home" where she was born and now lives there full-time and runs the private museum. The island has about 400 year-round residents. 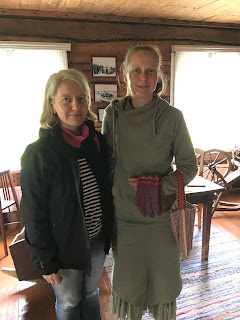 Signe and Marju holding the gloves I bought

Marju gave us a tour of the museum and the various buildings, and showed us the bright upstairs meeting room in the replacement stable building. She was in the process of pleating a traditional skirt of a jumper-style dress for a folk costume. Since the skirts are black, it is very hard to photograph them so that you can see the detail. Marju was working under a special task light. The skirt fabric is tightly pleated and what you see in the photo below is the inside of the skirt with white fabric and MANY pins, VERY close together. She was cording, or lacing, the bottom of the skirt so that it could be cinched up. She said that she had spent over 3 hours already and she was not halfway around on the first cord. I believe more bands of white fabric were to be added further up the skirt. She said that additional cords would go faster. You can see a small sample of the black pleated skirt fabric on the doll's outfit below. 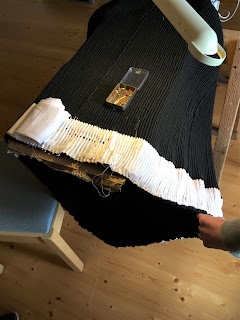 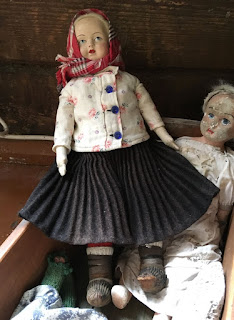 We continued our drive around the island and made our way to Saxby lighthouse. It was closed. From the sign, it appeared that it was open May 31 to September. We were there on May 25th in the early afternoon. However, there was a phone number on the sign and Signe called it. After hanging up, Signe said "Ten minutes, he sounded kind of sleepy." The caretaker arrived and let us in and we climbed the spiral stairs to the top. Once at the top, we slid the iron bar that was holding the 6" thick wooden door closed and I stepped out onto the metal platform. And I held on - to the railing - tightly! It was very windy! 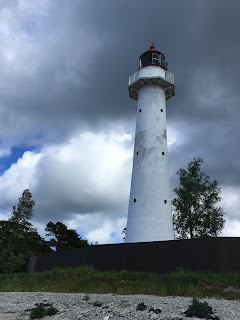 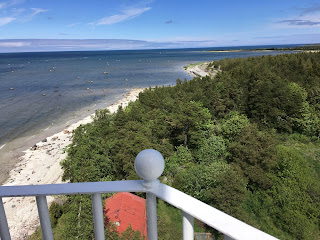 View from top of lighthouse

Signe had packed us a picnic lunch and although we had to hold onto everything so that it wouldn't blow away in the wind, we sat at a picnic table by the water and ate our little round sandwiches made of rice cakes, bacon, cheese, spinach, and tomato. We had other accompaniments including Lithuanian chocolate with forest berries, because Signe had just returned from a work trip there.

Further along on our drive, we found a windmill and a tiny farmers market with just two vendors. One vendor sold plants including fruit trees and the other sold smoked fish, smoked sausages, and dried mushrooms. I think I made a wise choice not to bring smoked fish back in the car and instead to eat the rest of our Lithuanian chocolate on the ferry ride back to the mainland.

I recently saw an interesting post on Facebook by Craft Camp Estonia that mentioned Vormsi Island. It stated, "The women of Estonian islands are known for being hard-working - a knitting bag was a woman's companion basically everywhere until the beginning of the 20th century. An old saying from Vormsi Island considers a woman without a knitting piece to be sitting like a man." Too funny!

I know a lot of knitters. We are industrious; we do not "sit like men." If we're not knitting, we might be grinding flour. 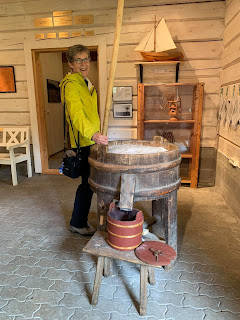 Flour grinding equipment at the museum,
photo courtesy of Signe