Classes, Sightseeing, and Cultural Experiences of the Handicraft Tour of Setoland

The organizer of the Handicraft Tour of Setoland is Külli Jacobson of Nordic Knitters/Estonian Mittens/Kagu Kudujad. Külli organized an absolutely fabulous trip. Our handicraft classes included four half-day knitting classes and three classes on other traditional Seto handicrafts. Külli was one of our knitting instructors (intarsia in the round) and she was also our translator. We had a class with Marje Linnus on square-stitch embroidery, which is traditionally done with red thread on white fabric and is used to decorate traditional blouses, aprons, and "head-towels." 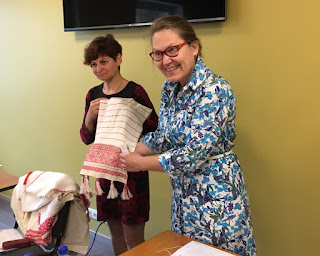 Another class was with Jane (pronounced Yanneh) Vabarna on Seto Colored Crochet, which is also used to embellish blouses. In addition, Jane's mother, Maret Vabarna, taught a class on tablet (or card) weaving, where we worked in teams to create belts. 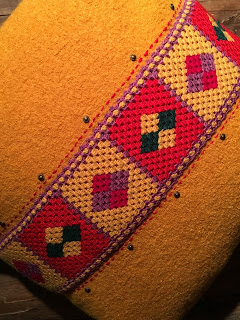 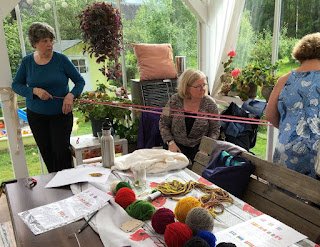 
One day, the location of our classes was an enclosed garden room in a charming building. Between our morning and afternoon class, lunch was served here and included the BEST homemade strawberry ice cream with tiny new-growth edible spruce needles that had been dipped in chocolate. Who knew pine needles could be soft and delicious? 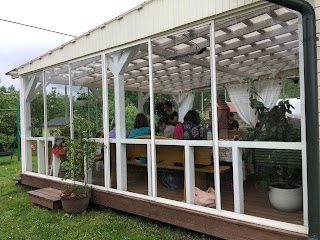 A view of our garden classroom from the outside

We visited Sigre Andreson, one of our instructors, at her home which is a restored fortress-farm. Sigre taught three knitting classes. The topics were: traveling stitches, a colorful braided cast-on and other braids, and a Seto men's stocking sample with an interesting edge treatment and some three-color-per-round knitting. We had the added challenge of working those three colors per round while using the intarsia in the round technique from an earlier class with Külli. 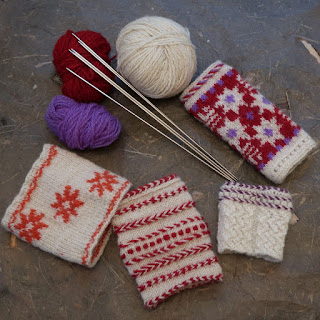 My samples from our four knitting classes

We had a day where we toured around Setoland. Our first stop was a handmade soap shop (some soaps made with bog water, turf, Värska lake mud, and crushed cranberry seeds). Next we went to the village of Laossina, where we visited a chapel (tsäassona) in a cemetery and also got a demonstration of traditional dyed egg rolling (picture an egg on a bobsled track). From there we drove to Lüübnitsa to climb a tower for a better view of Russia across the lake. We ended our trip in Räpina, at a shop called Meistrite Maja (master's house), to see Ulve Kangro's master crochet work. It was a full day that included a stop for a delicious family-style lunch. The menu was a hot potato dish with barley and bacon topped with cold creamy soup, rye bread, and two desserts - rhubarb cake and kama. Kama is a mixture of roasted barley, rye, oat, and pea flour prepared with kefir or sour milk. It sounds odd, but it was so delicious that I bought a bag of kama powder at the grocery store to bring home and try making it myself.

One additional stop on our day of touring, was the Värska Farm Museum, which included a special visit to view its textiles in storage - a knitters' paradise. Our guide described the older traditional white Seto national costume and showed the extremely long blouse sleeves. She said "there are only two types of people who wear sleeves like these - Seto women and those in straitjackets!" 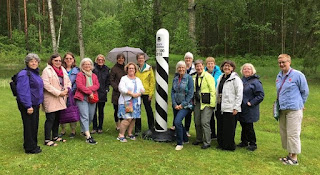 There was a shopping opportunity one evening at Külli's home. Her workshop in Räpina was being remodeled and therefore all of her mittens, gloves, and hand-dyed yarn were at her house. Our bus driver agreed to drive us to her home and wait patiently as we looked over our options and made our decisions. There were at least four suitcases full of mittens and gloves, some of which were spread out on tables. Hand-dyed yarn covered Külli's bed and much of the bedroom floor. 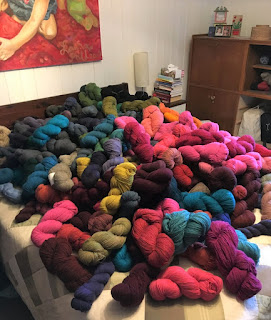 A bed full of yarn 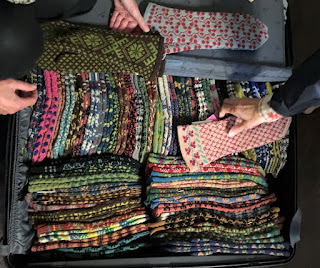 One of the suitcases full of mittens

One of our lunches was at a restaurant called Iti Leeväküük. Iti, the restaurant's owner, is a colorful character who is especially passionate about sourdough bread. Wow, that woman can bake! Her wooden sourdough barrel had been handed down from her grandmother. After a lunch of soup and sourdough rye bread, our dessert was another fabulous rhubarb cake, this time made with quark. 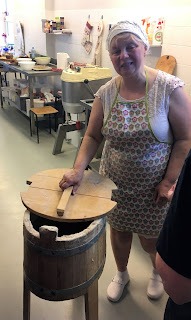 Baker Iti with her sourdough barrel

On our final night, we went to Obinitsa (where I had been once before on a field trip from Estonian Craft Camp). We met with Kauksi Ülle, the ethno-futuristic thinker and poet whose photo we had seen earlier in Tallinn (blog post here). We perused the craft shop that was located in an old Soviet sauna building and the art gallery nearby.

A special gala dinner was followed by Seto leelo polyphonic singing performed by a group of seven singers (one was the chef of our dinner and the other six were in traditional costume). Kauksi Ülle was one of the singers; you can see her on the far left in the photo below. An accordion player joined in, dancing ensued, and the current King of the Seto people arrived and shared with everyone present what appeared to be moonshine, drunk from a small communal cup. This was a very unique experience with a lot of laughter involved, especially when those of us with less skill tried dancing. 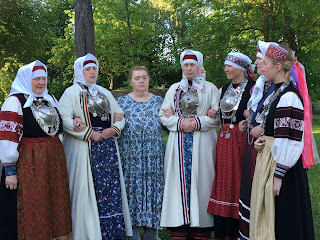 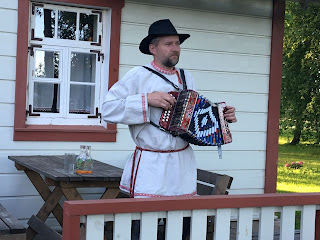 Click below for a short sample of Seto leelo singing

If you are interested in participating in this handicraft tour, see my prior post regarding details on how to sign up for the next tour which will take place Tuesday July 30 to Sunday August 4, 2019. The July-August tour will include a festival on Seto Kingdom Day, Saturday August 3. It is bound to be wonderful!