My trip to the Baltics was planned in January when I heard about a knitting camp entitled "Knit Out Your Latvian Design" that would take place in Latvia from April 29 to May 1.  All I needed was this little nudge and plans started to form.

My husband, Chris, who had not yet been to Latvia or Estonia was feeling left out and thought it was finally time for him to see these countries that I had visited so many times before.  It was decided that I would start my trip a little in advance of the knitting camp and take the opportunity to visit Lithuania for the first time (see my blog post here).  Chris would then join me when the knitting camp ended and we would have a chance to travel together in Latvia and Estonia.

So, after a few days in Vilnius, Lithuania, I arrived in Riga, Latvia, the day before the knitting camp started and met up with old and new friends at Senā Klēts, the National Costume Center.  We went out for a very nice dinner at Province (www.provincija.lv), a restaurant in the Old Town.  Since I was walking back to my hotel I could try the black currant version of Riga Black Balsam (Rīgas Melnais balzams) liqueur.  The standard version of Black Balsam herbal liqueur is not my favorite, but the black currant version was rather tasty!

Maruta Grasmane is the author of a fabulous book titled Latvieša Cimdi in Latvian or Mittens of Latvia in English.  The book is also known by some as the "Latvian Mitten Bible."  It is 438 pages thick and contains 178 individual mitten photos and 178 corresponding mitten charts.  Did you know that mittens have been an important part of Latvia's heritage and traditions?  Historically, a bride needed many pairs of mittens in her hope chest because she gave mittens as gifts to members of the bridal party and her new in-laws.  She also hung mittens in her new home and barn to symbolically bring good luck and prosperity to her marriage. 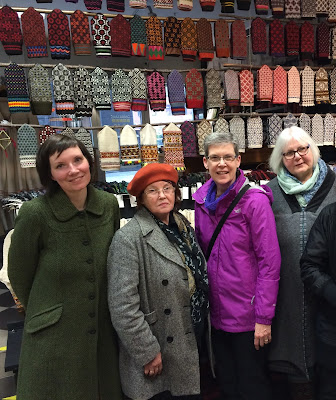 Maruta joined us for dinner and we were almost on our way out the door of Senā Klēts when this photo was taken with the backdrop of some of the mittens from the book.  Līga works at Senā Klēts and is the main contact for English speakers.  Connie goes by the name of "Wockensolle" on Ravelry (see my blog post about Ravelry here) and is one of the moderators of the Knit Like a Latvian group.  She is from Germany and is currently working on the German translation of the Mittens of Latvia book.  Latvian knitting is spreading around the world!

Since I was one of the editors of English text for the Mittens of Latvia book, that became a way for me to introduce myself to various people that I met.  The book is available for sale in yarn shops, book stores, and handicraft shops in Riga, so I could pick the book up off the store's shelf, turn to the last page of the book, show my name, and introduce myself to the shop owner or clerk.  I had instant credibility!

Then it was on to the mitten camp.  A small bus picked us up and took us to Strazde manor, which is located a short distance from the town of Talsi.  Knitters from Latvia, Germany, the Netherlands, Estonia, Lithuania, and the United States came together for the conference.  Our accommodations were in the Strazde manor house, which also had an auditorium/conference room for our lectures and classes, as well as a kitchen and dining room for our buffet meals. 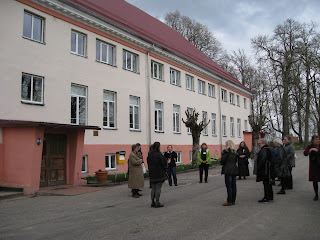 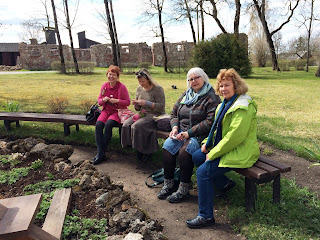 Külli (Estonia), Baiba (Latvia), Connie (Germany), and Pat (USA)
Our first lecturer, Baiba Vaivare, spoke about Latvian Mitten Design and showed many beautiful examples via her slide show as well as actual knitted mittens.  Baiba spoke in Latvian but Dārta, one of the organizers, was our translator. 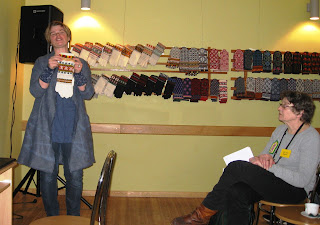 I was especially interested when Baiba showed a particular pair of mittens that she had designed.  To me they did not appear to be traditional Latvian mittens.  They were figurative rather than repetitive and geometric.  Then Baiba told us how she had designed the mittens with inspiration from an old painted dowry chest.  So, it turns out that the design WAS based on traditional Latvian design, but one that the designer had seen in wood rather than knitting.  What makes this even more interesting to me is that when I was in Latvia in 2001, one of my friends bought a pair of mittens of this very design.  I liked the mitten and asked to borrow the mitten from her to chart it.  I haven't knit the mitten yet, but recently another friend, Sandy De Master, decided to knit a replica of these mittens as a wedding shower gift for her niece, Sara.  I shared my chart with Sandy.  We've decided to call them the "wedding mittens."  I shared the story with Baiba, the lecturer and designer -- the story of these wedding mittens being knit 15 years after the purchase of the original pair.  What a small world!  I'm happy to know the design story behind these unusual Latvian mittens. 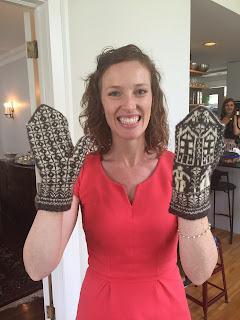