We did actually see a few Dalmatian dogs while traveling along the Dalmatian coast and on a Dalmatian island, but not a lot.

In Split, we continued our hiking theme by taking a walk on the Marjan peninsula. Which direction do you think we went? Up, of course. 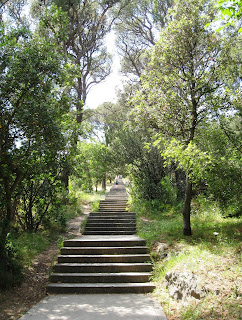 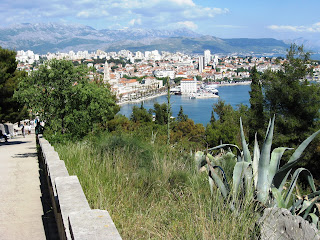 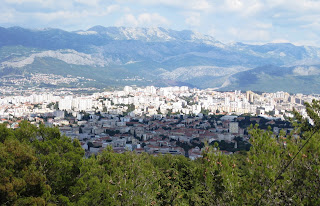 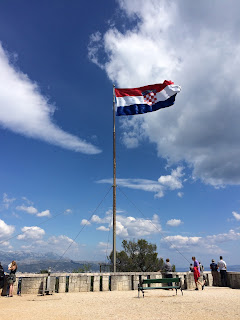 A different red, white, and blue

Diocletian's Palace, a UNESCO World Heritage Site, was built in the 4th century and is an incredibly interesting area to explore. Shops, cafes, restaurants, and apartments are located in this historical area of old buildings and mostly narrow streets. Here's a view of the central square. 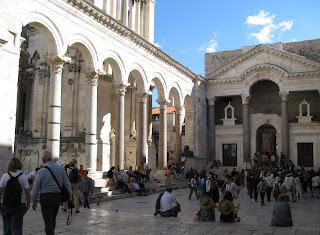 Surprisingly, we were able to meet up with a friend in Split. We've known Jonathan almost since he was born. He's a young man who moved from England to Wisconsin with his parents when he was very young. In May, he finished his fourth year of studies at St Andrews in Scotland and was about to head back home to Michigan but had planned a week-long respite (maybe party?) with 16 of his friends at a villa outside of Split. We found out about his trip just before we left on ours and made plans to meet, if possible. We connected in Split and enjoyed lunch together before meeting some of his friends and letting him go on his merry way. 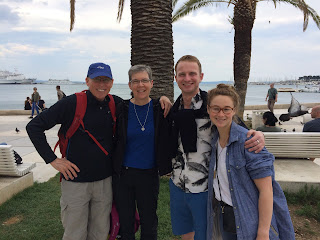 From Split, we took a catamaran ferry to the island of Korčula where we would have spent two nights, but in May the ferry only runs four times a week, so we arrived on a Monday and had to leave on a Tuesday. If not Tuesday, we would have been there until Friday and we needed to save time for Dubrovnik. We stayed in the town of Korčula, just outside of the steeply stepped Old Town. Of course, we had our own steps that led to our little apartment in a 400-year-old stone building with very friendly hosts - daughter handled the booking, son met us upon arrival, mom was busy cleaning, and dad, who had lived in the US and Australia earlier in life, chatted with us later. 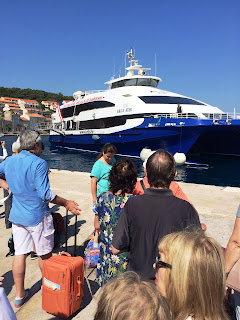 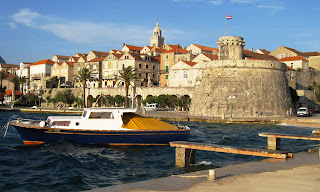 I had booked a table for dinner at Aterina Konoba and most of their tables are outdoors which would have been great if the winds weren't blowing at almost gale force. The restaurant was just getting an indoor seating area ready for the season but it wasn't quite ready for prime time. The extension cords and contractor's lighting just added to the ambiance and we had a lovely dinner in the mostly inside/not quite outside new dining room area.

The cutest Tourist Info Center - I love this former loggia that was built in 1548 and now functions as Korčula's TI. 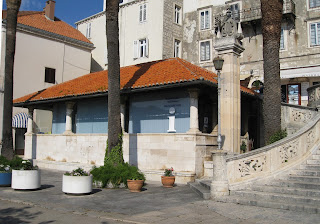 Another ferry ride on Tuesday and we arrived in Dubrovnik for a three night stay. Of course, we spent one day walking the City Walls. 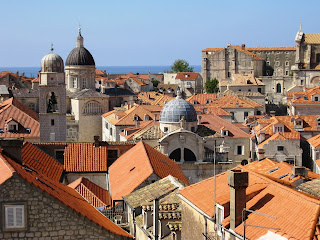 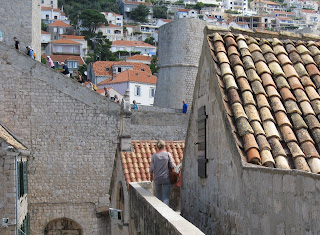 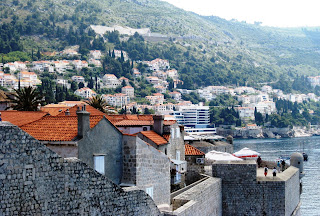 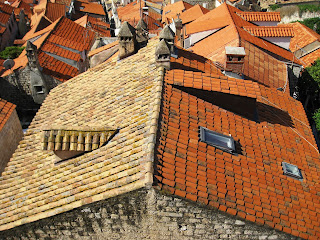 Dubrovnik's Old Town has steep "streets" and many restaurants with outdoor seating. 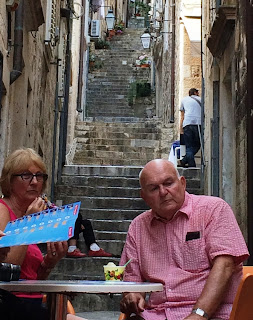 Apparently that wasn't enough steps, so we spent an afternoon hiking on the Lapad Peninsula while a storm brewed. Another day we took a bus to Cavtat for something to do on our one day of rain and we still ended up having a lovely walk around a small peninsula and then found shelter in an awning-covered outdoor restaurant where we ate lunch and watched the rain dripping off the roof. 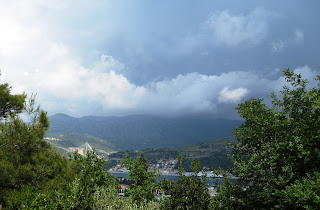 We especially enjoyed the view of Dubrovnik's Old Town and its walls from our apartment. And yes, the apartment was up a few steps, but everything is UP in Croatia. 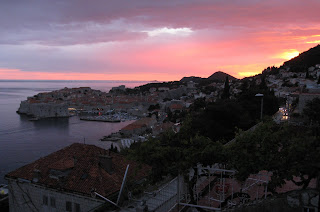 Our room with a view