When planning my trip to the Baltics for this year, I considered some possibilities for a three or four day side trip from Riga. I thought of some locations that I have not yet visited: St Petersburg in Russia, Warsaw in Poland, Kaunas in Lithuania, and Kaliningrad, an exclave of Russia (exclave is not a term that we use often but it refers to a "portion of territory of one state completely surrounded by territory of another" - Kaliningrad is part of Russia but is located on the Baltic Sea and bordered by Poland and Lithuania, and is not connected to any other portion of Russia). Instead, I decided to stay closer to "home" and have a sojourn within Latvia.

Ventspils is the sixth largest city in Latvia, a port city on the Baltic Sea, and known for its cow statues decorated by local artists. It is also home to Solvita Zarupska, a knitting instructor and master knitter whom I met in 2018 when I attended the Knitting Retreat in Kurzeme. Solvita was one of the Latvian instructors who taught her beaded knitting class in English, without assistance from a translator. We are friends on Facebook and I thought it might be nice to visit her while in Ventspils. When I contacted Solvita, she was excited to have me come to her city and she offered to show me around. As it turned out, we had two and a half days together and she was a wonderful hostess in her hometown. She is known as Solvitas Rozes and you can find her website here: http://www.solvitasrozes.lv/. 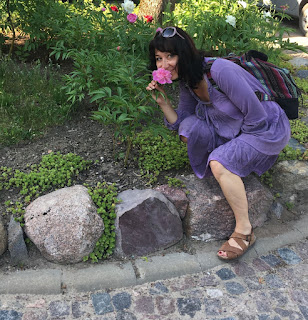 Solvita, stopping to smell the peonies

I chose an Airbnb apartment with a bicycle (lock and helmet included). Since I'm a daily bike rider back home, I thought it would be the perfect way to get around town. This also worked out great with Solvita who uses a bike for transportation. What I didn't count on was a very short bike (I am rather tall) with just one extremely low gear; what we call a "granny gear." A granny gear is great if you need to bike up a very steep hill, but on other terrain, you end up pedaling like mad and going nowhere fast.

After our first evening of biking around the sights of Ventspils, Solvita and I both decided that this bike was not suited to our next day's destination, a lake eight kilometers away. She offered me the use of her son's bike. It turned out to be a very nice mountain bike with a big range of gears, disc brakes, and an adjustable-height bike seat. It was almost perfect. However, her son is perfectly happy with a very narrow, very hard bike seat, unlike my comfort saddle at home. Also, the bike was equipped with clipless pedals which require a shoe with a special cleat. Therefore, my Keen sandals weren't resting on flat pedals, but rather on little rounded knobs. So, there were still a few challenges. 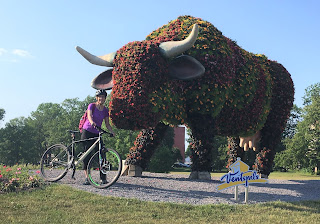 I managed to ride to and from Būšnieku Lake, an inland lake, where we spent the entire day sitting at a picnic table knitting away and enjoying glorious weather. On our way to the lake, we stopped near Staldzene, an old fishing village on the Baltic Sea, with an iconic tree as its symbol. We had a picnic breakfast under the iconic tree whose fate has now been determined by erosion. 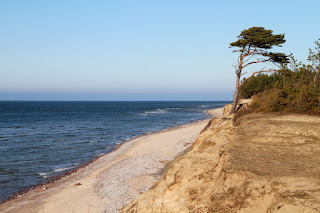 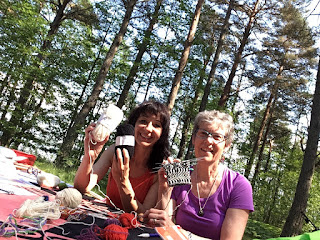 Solvita and me knitting near Būšnieku Lake

I was happy to leave the bikes at rest on the third day. We took a bus to Kuldiga and walked around this charming town that I had visited briefly last year. In Kuldiga, there is the Ventas rumba (Europe's widest waterfall) and a picturesque bridge over the Venta river. 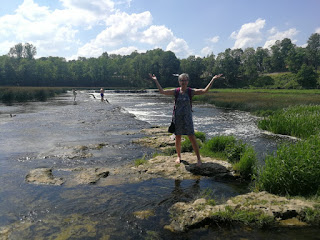 Me standing at the top of the low, wide waterfall 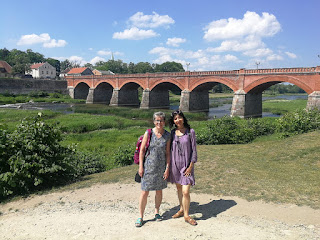 On our walk to these sights, we just happened upon the Čaupe knitting group. They were knitting together outside a museum and waiting for a TV crew to show up to film a segment on "Knit in Public Day" that was coming up on Saturday, June 8. 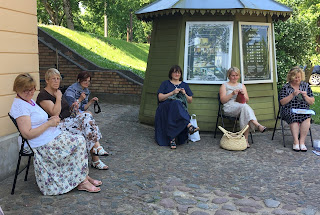 The TV reporter interviewed members of the knitting group as well as Solvita. During the interview, Solvita mentioned that I was a knitter from America and then the camera was on me. I got a few seconds of fame on the morning program called "900 sekundes" on LNT (Latvian National TV). I found the segment online and there I was, "Mērija Džermaine, knitter from USA." 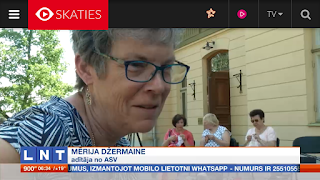 The knitters had a display of knitted items available to view. I was intrigued by the series that members of the group knit using a traditional motif from the region. 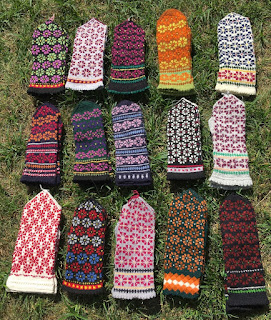 Love the repetition and variety!

After our TV interlude and our river sightseeing, we found a gazebo in a park and continued with our knitting. 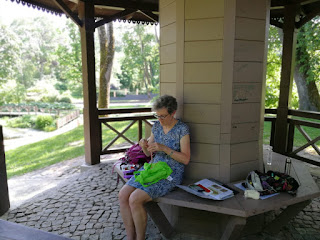 During the course of our two day mini knitting retreat, I'm sure I knit at least a dozen swatches of new stitch patterns and techniques. Thank you so much, Solvita!