Meet-ups in Estonia and Latvia

Besides my more extended visits this year with Signe, Solvita, Külli, and the knitters on the Handicraft Tour to Setoland, I also had a chance to see other friends in Estonia and Latvia.

Kaidi is a young Estonian woman who was on the Knit in Kurzeme trip last year. A group of us met Kaidi for dinner at Moon Restaurant in Tallinn. In Estonian, Moon means Poppy. Moon Restaurant has "modern Russian food with great passion!" We had an entire room with a large table for our group of eight and enjoyed a variety of dishes including pirohzhki and borsch soup. 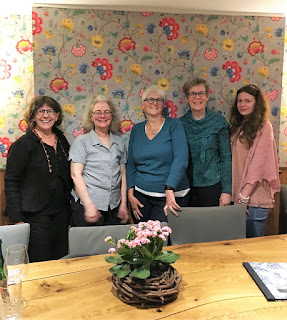 Reunion of five knitters from 2018 Knit in Kurzeme retreat
Patricia, Rebecca, Dayna, me, and Kaidi

Mari Pukk was one of my Estonian instructors for finger-woven flat braids or plaited ribbons when I attended Estonian Craft Camp in 2014. We met and walked to Faehlmanni Kohvik (cafe) for a light meal. My chicken curry soup was outstanding and very filling. However, Mari told me about the onsite baker and we couldn't pass up the eclair, filled with cream and cherries, that was just as good as the soup. Mari has been working on her dissertation - producing reproductions of historical cotton fabrics from the island of Kihnu. Original fabrics from the Kihnu Museum were used as the basis, but Mari had to extrapolate and interpolate missing bits to complete the designs. And then there was the matter of color. Well done, Mari! 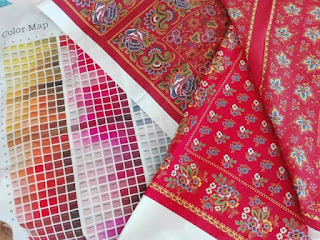 I met Rauno, a young Estonian man, when he worked at the Viljandi Tourist Information Center in 2013 and have seen him each time I've returned since then - whether he's living in Viljandi or Tartu. My history with Rauno has been documented here in 2014, here in 2016, and here in 2018. On this trip, I thought that I would not have time nor opportunity to meet up with him and was disappointed. However, as the bus for the Handicraft Tour to Setoland rolled through Tartu on our way from Tallinn to Seto, I messaged Rauno to say hi. He offered to make the drive to Seto for a meet-up and I found a free evening, so our plans were made. He arrived just after dinner and I showed him around the Värska Spa (Värska Sanatoorium) grounds where our group was staying and then we had a drive to explore the surrounding area a bit. Thanks, Rauno, for taking the time and making the effort to get together. It was a delight! 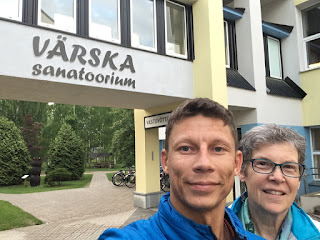 A Japanese woman named Ai (pronounced I) was also on the 2018 Knit in Kurzeme trip. She spent months in Latvia last year and I had heard that she was back in Latvia again. At a bus stop on my second day in Riga, I saw the back of a young woman with dark hair. She had a backpack with miniature Latvian mittens hanging from it. I leaned forward to look at her face and it was Ai! So excited to see her on our way to the annual craft market! 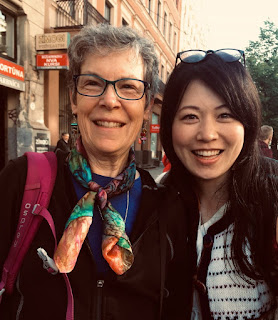 Before my travels to Estonia in 2013, I had found a blog written by CarlaM, one of The Dutch Knitters (http://lifenknitting.net/). I enjoyed reading about her knitting travels in Estonia and found her blog to be helpful and informative. I then met Carla in 2013 at the Conference on Traditional Knitted Sweaters Around the Baltic Sea. We've been friends ever since. We were both in Riga at the same time this year, having each just finished with different knitting-related tours, so we made plans to meet one evening. Carla was traveling with her friend, Titia, and the three of us met for drinks and dinner. 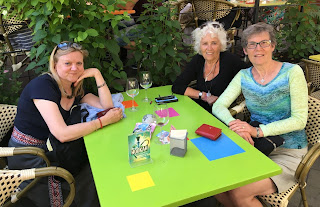 Carla, Titia, and me

Mara, a Latvian knitting friend who has twin toddlers and whose knitting time is now a bit more limited, was able to meet me on a Saturday morning and we decided to go to the Kalnciema Quarter Farmer's Market. It's a bus ride from the Old Town and a bit upscale for a farmer's market, but there was live music and we enjoyed walking, talking, eating, and shopping.

Mara shopping for a new hat

Well in advance of this trip, I had arranged for a half-day knitting class with Baiba Pilāne in Riga. I originally met Baiba in Strazde, Latvia on an earlier knitting trip. She offered to teach a class on "knitted ribbon cuffs" which are cuffs that are knit flat, rather than in the round, and sideways, which is not the usual direction. Eight knitters, including Ravelry friends, learned about these unique Latvian ribbon cuffs at the Craft House of Riga Culture Center "Ilguciems." In addition to the class, we also had a sneak peek at mittens that would be in an exhibit opening the following weekend. 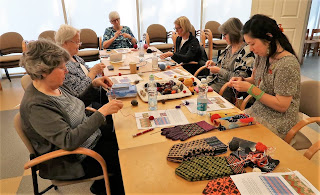 Studious and diligent in the classroom 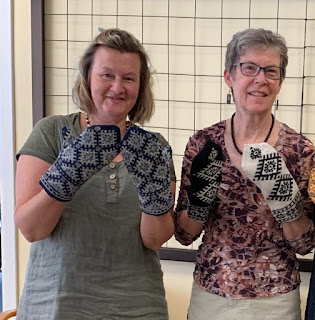 Baiba and me with mittens from the exhibit

I was lucky enough to be invited to join Ansis Grasmanis and his wife, Monta, for a small dance festival taking place in the town of Ikškile on a Saturday. Ansis works at Senā Klēts, the National Costume Center of Latvia, and is the son of Maruta Grasmane, author of the fabulous Mittens of Latvia book and owner of Senā Klēts. Compared to the Song and Dance Festival that happens every five years in Latvia, this dance festival was small, but so much bigger than I expected.

Look at all those performers on stage at once!

It was a very hot day and Monta picked me up in Riga for the half hour drive to Ikškile. Jeannie from Colorado (known as soxnsox on Ravelry and one of the moderators of the Knit Like a Latvian group) was also part of our entourage along with Ansis' and Monta's daughters. There were vendors selling food and handicrafts, incredible decorative displays of cheese, street dance performances on stages, and an interesting cheese power-lifting competition. In the evening, we went to a larger outdoor stage area for the folk dance performance. The dance performances were wonderful and we watched especially for Ansis who was performing with one of the dance groups. 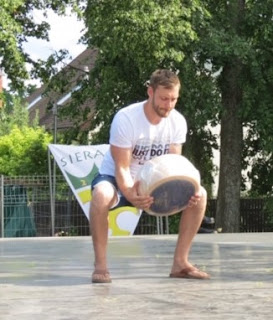 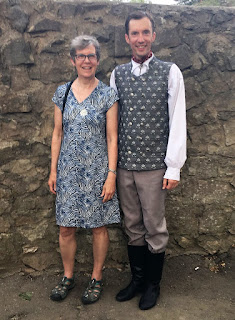 Linda Rubena, organizer of the 2016 Knitting Retreat in Strazde, was available to meet on my last evening. We met and walked to her office at the Latvian National Cultural Center where I saw samples from a recent dye workshop that she attended as well as the amazing library of textile reference books in her office. I now have her latest book, South Kurzeme Knitted Jackets. Then it was off through the park to Herbārijs, a fairly new cafe on the rooftop terrace of Galleria Riga, a seven-story shopping mall in the city center. A light but delicious dinner was perfect for my last night. 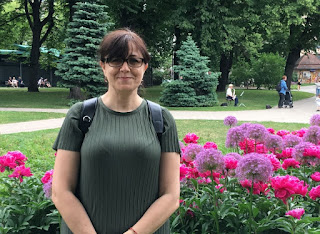 Linda trying to blend in with the greenery