As you may know, as part of the sweater conference in Estonia, I went to the Heimtali craft fair and participated in the Käi ja Koo (walk and knit contest).  After the fair, I returned to Viljandi and stayed one more night.

I stopped at the Viljandi Tourist Information (TI) office just before 15:00 when it closed on a Saturday. I joked with the young man working the TI office about my coming in just before closing and that he was probably thinking, "why does everyone come in just before we close?"  He was very pleasant and I got some information from him about the islands I was heading to the next day and about Museum Night which was happening in Viljandi that evening.

After leaving the TI office, I stopped for a cold Coke at a kiosk; it was a VERY hot day. While I was sitting outside in the shade drinking my Coke, the young man from the TI office stopped to greet me. He was with a young woman who had been in the TI office, too. They invited me to join them for a folk dance event on the soccer field down near the lake. They were very friendly and gracious to me. I would never have known about the folk dance event if I had not met them. 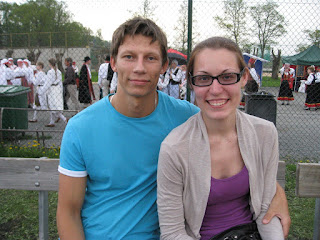 We walked to the soccer field and talked while we were waiting for the dancing to begin at 16:00. I told them that I had been to the Heimtali craft fair and the young woman said that her parents were ceramicists and had attended the fair. I pulled out the ceramic heart necklace that I had purchased and asked if her parents had made it. Of course, they had.

Upon my return to the US, I found an email address for the potters on the website that was listed on the packaging of my ceramic heart.  I wrote an email to tell the potters how delightful and welcoming their daughter and her friend were to me and sent photos that I took that day (of the young couple who took me to the folk dance event and also of the potters and their booth at the craft fair). 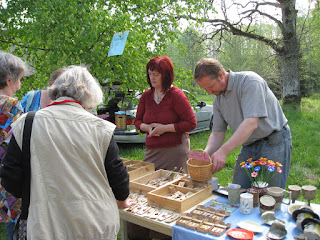 I have now heard back from Getter, the friendly young woman who accompanied Rauno, the young man from the TI office.  Getter wrote "It was brilliant little mysterious coincidence.  If you are ever planning to come to Estonia again, we would kindly welcome/host you. This offer does not expire;)"

How very sweet.  I hope to see them again someday.  Thanks for the warm Viljandi welcome and the experience of the folk dance spectacle!