Muhu and Mai in May 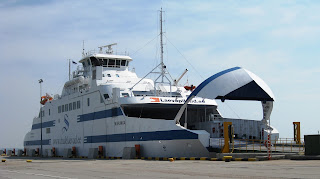 Through emails before my trip to Estonia, I got some very good advice from Mai Meriste about handicraft places to visit on Muhu and also a very key piece of information which was that I would definitely need a car to get around the two islands and see everything that I wanted to see.  So although I took public transportation most of the time in Estonia, I did rent a car for one day while I was on the islands.  Here's my little Mercedes in front of the käsitöö pood (handicraft shop) that happened to be open only Thursday-Saturday and I was there on a Monday.  Not to worry though.  There were other handicraft shops to be found open on a Monday. 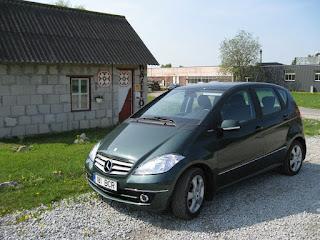 Mai Meriste is one of three authors of an incredible book titled Designs and Patterns from Muhu Island - A Needlework Tradition from Estonia.  I had purchased the book over a year ago while at one of my teaching gigs at The Trading Post for Fiber Arts in Pendleton, Indiana. 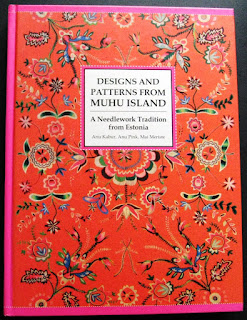 And, yes, that's the same Mai Meriste who was on the winning team at the Käi ja Koo event. 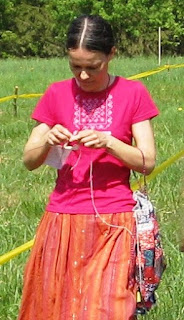 Mai works at the Muhu Museum, which was one of my stops on Muhu Island, but she was not working at the museum the day I visited.  We emailed during the day and although Mai had a very busy "day off," she emailed that "the WiFi area in Orissaare is in front of the eating place called Valge Varese Trahter (has white crows on its windows). If you will happen to sit there when I'm going to kindergarten to pick up my boys, we can sit down for a while. :)"  And that's exactly what we did.  Another virtual friend becomes real.
Posted by Mary G at 7:23 PM