I made contact with Tiina Meeri, an Estonian knitter, prior to my travels and although she would not be attending the conference, she was very willing to meet with me when I was in Tallinn. 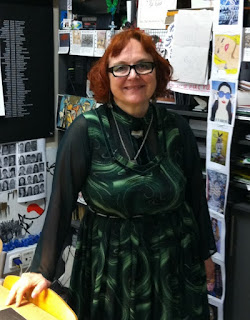 Tiina has written a number of Estonian knitting books and was the on-screen instructor in a series of knitting instruction films in the 1990s.  These films are still being shown on Estonian TV today.  I found a website that had archives of the films available to view.  Although I don't speak or understand Estonian, I think that Tiina Meeri may be the Estonian equivalent of Elizabeth Zimmermann and the Lõngakera (translates as Yarn Ball) knitting series may be similar to the Knitting Workshop TV series with Elizabeth Zimmermann which originally aired on PBS. 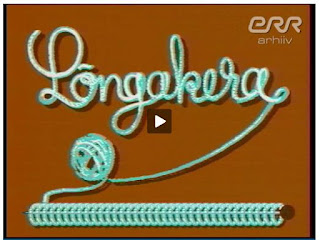 Tiina is a schoolteacher of the arts and is an amazingly energetic woman who moves at a fast pace, whether she's walking, talking, or showing knitting techniques (although she can slow it down some, if need be).  According to Tiina Meeri, she has taught many Estonians how to knit through her books and educational films.

She took time to meet with me on two separate days and encouraged me to film her hands as she demonstrated some of the traditional Estonian knitting techniques.  Tiina, in true schoolteacher fashion, even gave me homework to do between our meetings.
Posted by Mary G at 7:44 AM